LA County Marriage at the Airport!

This article about airport marriage appeared in USA Today on June 27, 2008. Chris officiates many L.A. County marriage airport marriages. But Officiant Guy can often go to any airport in Southern California. Scroll down to see the airports he can serve. Couples often fly here  to take advantage of the unique California confidential marriage license. Many want to make their wedding as simple as possible. He has married couples in the terminal, at the top of one of the parking structures, at tables in the restaurants…anywhere. Your airport marriage ceremony can take place anywhere you choose. Chris can help you if you  are    en route, on a layover,  or making Los Angeles your destination wedding spot. 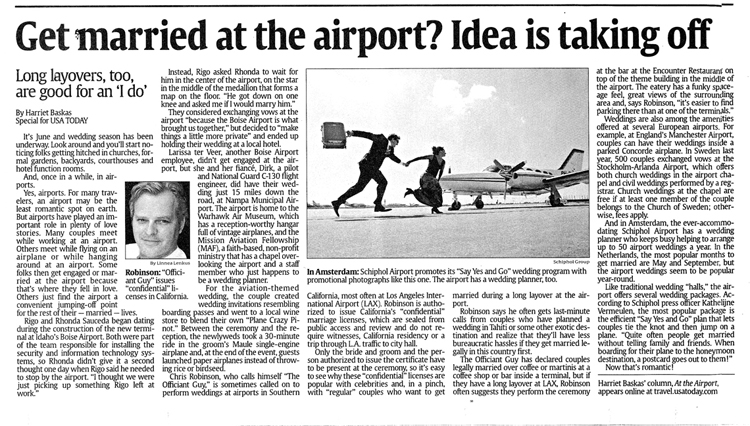 Get Getting married at the airport? Idea is taking off.

Long layovers, too, are good for an ‘I do’

And once in a while, in airports.

Yes, airports. For many travelers, an airport may be the least romantic spot on earth. But airports have played an important role in plenty of love stories. Many couples first meet while working at an airport. Others meet while flying on an airplane or while hanging around at an airport. Some folks then get engaged or married at the airport because that’s where they fell in love. Others just find the airport a convenient jumping off point for the rest of their – married – lives.

Rigo and Rhonda Sauceda began dating during the construction of the new terminal at Idaho’s Boise Airport. Both were part of the team responsible for installing the security and information technology systems, so Rhonda didn’t give it a second thought one day when Rigo said he needed to stop by the airport. “I thought we were just picking up something Rigo left at work.” Instead, Rigo asked Rhonda to wait for him in the center of the airport, on the star in the middle of the medallion that forms a map on the floor. “He got down on one knee and asked me if I would marry him.” (She said yes.) They considered exchanging vows at the airport, “because the Boise Airport is what brought us together,” but decided to “make things a little more private” and ended up holding their wedding at a local hotel instead.

Larissa ter Veer, another Boise Airport employee, didn’t get engaged at the airport, but she and her fiancé Dirk, a pilot and National Guard C-130 flight engineer, did have their wedding just 15 miles down the road, at Nampa Municipal Airport. The airport is home to the Warhawk Air Museum, which has a reception-worthy hangar full of vintage airplanes, and the Mission Aviation Fellowship (MAF), a faith-based, non-profit ministry which has a chapel overlooking the airport and a staff member who just happens to be a wedding planner.

For the aviation-themed wedding, the couple created wedding invitations resembling boarding passes and went to a local wine store to blend their own “Plane Crazy Pinot.” Between the ceremony and the reception the newlyweds took a thirty-minute ride in the groom’s Maule single-engine airplane and, at the end of the event, guests launched paper airplanes instead of throwing birdseed.

I now pronounce you … seatmates for life

Airport weddings aren’t just something they do in Idaho. Chris Robinson, who calls himself “The Officiant Guy,” is sometimes called on to perform weddings at airports in Southern California, most often at Los Angeles International Airport (LAX). Robinson is authorized to issue California’s “confidential” marriage licenses, which are sealed from public access and review and do not require witnesses, California residency or a trip through LA traffic to city hall. Only the bride and groom and the person authorized to issue the certificate has to be present at the ceremony, so it’s easy to see why these “confidential” licenses are popular with celebrities all the time and, in a pinch, with “regular” couples who want to get married during a long layover at the airport.

Robinson says he often gets last-minute calls from couples who have planned a wedding in Tahiti or some other exotic destination and realize that they’ll have less bureaucratic hassles if they get married legally in this country first.

The Officiant Guy has declared couples legally married over coffee or martinis at a coffee shop or bar inside a terminal, but if they have a long layover at LAX, Robinson often suggests they perform the ceremony at the bar at the Encounter Restaurant on top of the theme building in the middle of the airport. The restaurant has a funky space-age feel to it, great views of the surrounding area and, says Robinson, “It’s easier to find parking there than at one of the terminals.”

Weddings are also among the amenities offered at several European airports. For example, at England’s Manchester Airport, couples can have their weddings inside a parked Concorde airplane. In Sweden last year, 500 couples exchanged vows at the Stockholm-Arlanda Airport, which offers both church weddings in the airport chapel and civil weddings performed by a registrar. Church weddings at the chapel are free if at least one member of the couple belongs to the Church of Sweden, otherwise, fees apply.

And in Amsterdam, the ever-accommodating Schiphol Airport has a wedding planner who keeps busy helping to arrange up to 50 airport weddings a year. In Holland, the most popular months to get married are in May and September, but the airport weddings seem to be popular year-round.

Like traditional wedding “halls,” the airport offers several wedding packages. According to Schiphol press officer Kathelijne Vermeulen, the most popular package is the efficient “Say Yes and Go” plan that lets couples tie the knot and then jump on a plane. “Quite often people get married without telling family and friends. When boarding for their plane to the honeymoon destination, a postcard goes out to them!”

A fast get-away may be fine for some couples, but Vermeulen says the airport is booking an increasing number of “Ticket to Paradise” packages. These can include anything from a champagne brunch to a big party with guests. “Afterwards,” says Vermuelen, “the couple can take some of their guests with them for a holiday. You can imagine what the airport looks like when a bride and groom, completely dressed up, with 25 guests also all dressed up, pass by and board a plane.”

Harriet Baskas writes about travel etiquette for MSNBC.com and is the author of Stuck at the Airport.

TELL US: Have you gotten engaged or married at an airport? Share your stories below.

Chris  can officiate your wedding at:

Chris Robinson is a California ceremony officiant. He has been marrying couples and issuing Los Angeles marriage licenses for over dozens of years. If you want to get married anywhere in San Diego County to Santa Barbara County give the premiere officiant for weddings in LA County a call at (310) 882-5039 or (562) 547-3255 or fill out the contact form.

Preferred Officiant on the Knot