Excerpt from USAToday and ABC News:

Will you marry me – at the airport?

Airport weddings aren’t just something they do in Idaho. Chris Robinson, who calls himself “The Officiant Guy,” is sometimes called on to perform weddings at airports in Southern California, most often at Los Angeles International Airport (LAX). Robinson is authorized to issue California’s “confidential” marriage licenses, which are sealed from public access and review and do not require witnesses, California residency or a trip through LA traffic to city hall. Only the bride and groom and the person authorized to issue the certificate has to be present at the ceremony, so it’s easy to see why these “confidential” licenses are popular with celebrities all the time and, in a pinch, with “regular” couples who want to get married during a long layover at the airport.

Robinson says he often gets last-minute calls from couples who have planned a wedding in Tahiti or some other exotic destination and realize that they’ll have less bureaucratic hassles if they get married legally in this country first.

The Officiant Guy has declared couples legally married over coffee or martinis at a coffee shop or bar inside a terminal, but if they have a long layover at LAX, Robinson often suggests they perform the ceremony at the bar at the Encounter Restaurant on top of the theme building in the middle of the airport. The restaurant has a funky space-age feel to it, great views of the surrounding area and, says Robinson, “It’s easier to find parking there than at one of the terminals.” . . .

Click on USA Today or ABC News to read the whole online story. Click on Airport Marriage to see the hard copy of the June 27, 2008 USA Today. 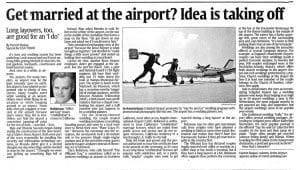