Officiant Guy, has over 20 years of ceremony wedding officiant experience. Call him today at

.
Chris Robinson is an ordained non denominational wedding minister. He is also a notary public who is specially authorized by L.A. County to issue a Los Angeles marriage license anywhere in California. He’s also a recovering attorney of 18 years. And he’s a father of three with his wife of 24 years. Chris is about as close as you can get to a California justice of the peace. He knows the law, he knows the marriage regulations, and also, the marriage requirements in California. He gets it done right with style and class. 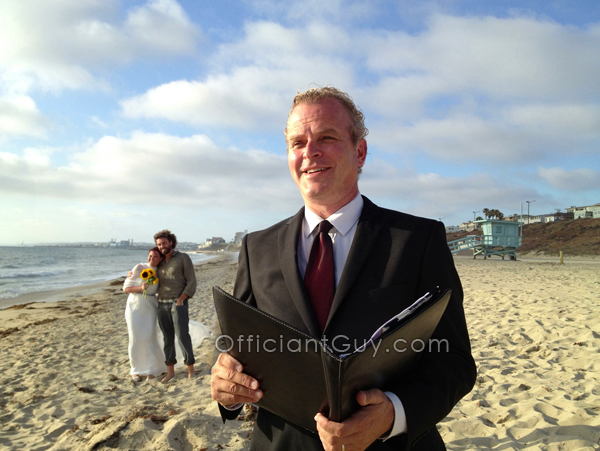 Are You Considering Eloping?

Chris is a last minute elopement specialist. He can help you elope now.
He can issue a marriage license and officiate your wedding. What are officiants? Click and find out, or find out on Wikipedia.
Visit the Wedding Blog to find out more.

Where? Anywhere in Southern California, including Los Angeles or Orange County or Ventura County or Riverside County or even Santa Barbara County

Intelligent, poised and appropriately reverent, Chris’s mission is to help couples get married in a very easy, approachable atmosphere.

The Officiant Guy was featured as a

Officiant Guy was suggested by Southwest Airlines for a destination wedding, and subsequently by USAToday for a short notice airport wedding. He has been quoted in the LA Times. He was the wedding officiant for the elopement of The Real Housewives of New York star, Aviva Teichner to Dana Cody which was featured in the Daily Mail UK.

Check out all the media he has received.

These attributes have made Chris the most sought after officiant for wedding s in Southern California..

All Kinds of Wedding Ceremonies All Over Southern California

Chris Robinson performs wonderful wedding ceremonies in any fashion. He respects your need for privacy and still has established a personal relationship with many couples that will last a lifetime!

He is the best wedding officiant in Los Angeles, but he can easily go to Orange County, Ventura County, Riverside County, San Bernardino, and even Santa Barbara County for your wedding.

Chris Robinson is a California non denominational wedding minister. He has been performing wedding ceremonies and delivering California confidential marriage licenses for over two decades. If you wish to get married somewhere in LA County give the best ceremony officiant in Southern California a telephone call at (310) 882-5039 or (562) 547-3255 or fill out the contact form.